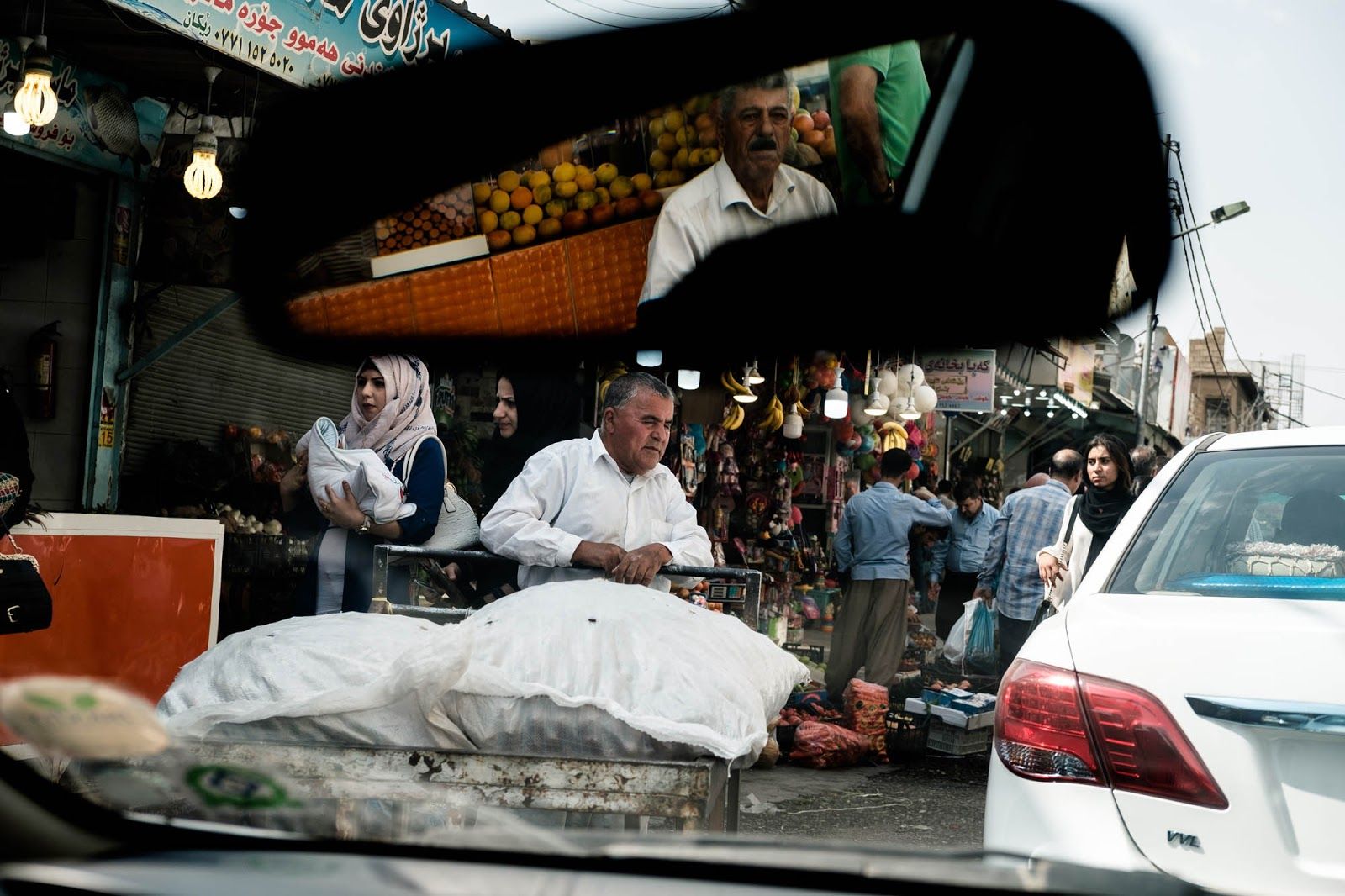 Iraqi Kurdistan, October 2018
‍
It threatened to storm as we breakfasted in Erbil. Instead of grey though, the world faded to a dull orange in the Iraqi Kurdish capital. Flat topped buildings stretched to the edge of the city, ending in the reddish murk. I wasn’t sure if the storm was bringing dust or rain. 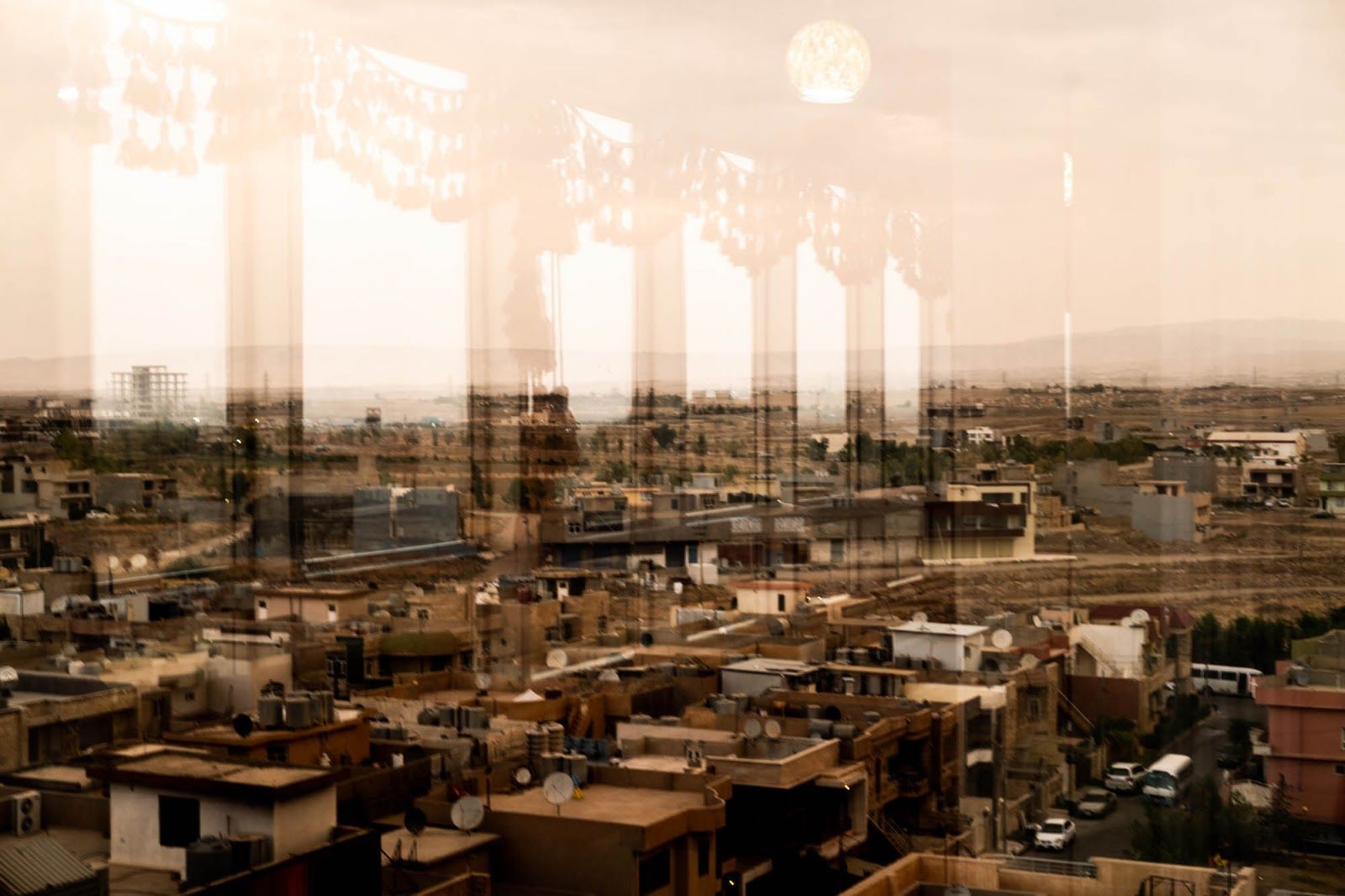 Some incredible weather followed my friend and I from Sulaymaniyah to Dohuk, stopping at Erbil in between. We’d taken smaller roads to stay inside Kurdish boundaries, as my visa didn’t allow me to enter the rest of Iraq. The relentless sunshine of the first day gave way to this brooding gloom on the second. By the time Erin and I were out of Erbil’s plains and into the mountains, the dust had given way to water, and long lines of rain were falling from a charcoal sky, offset by the brilliant gold of wild grasses.
‍
What a sight. 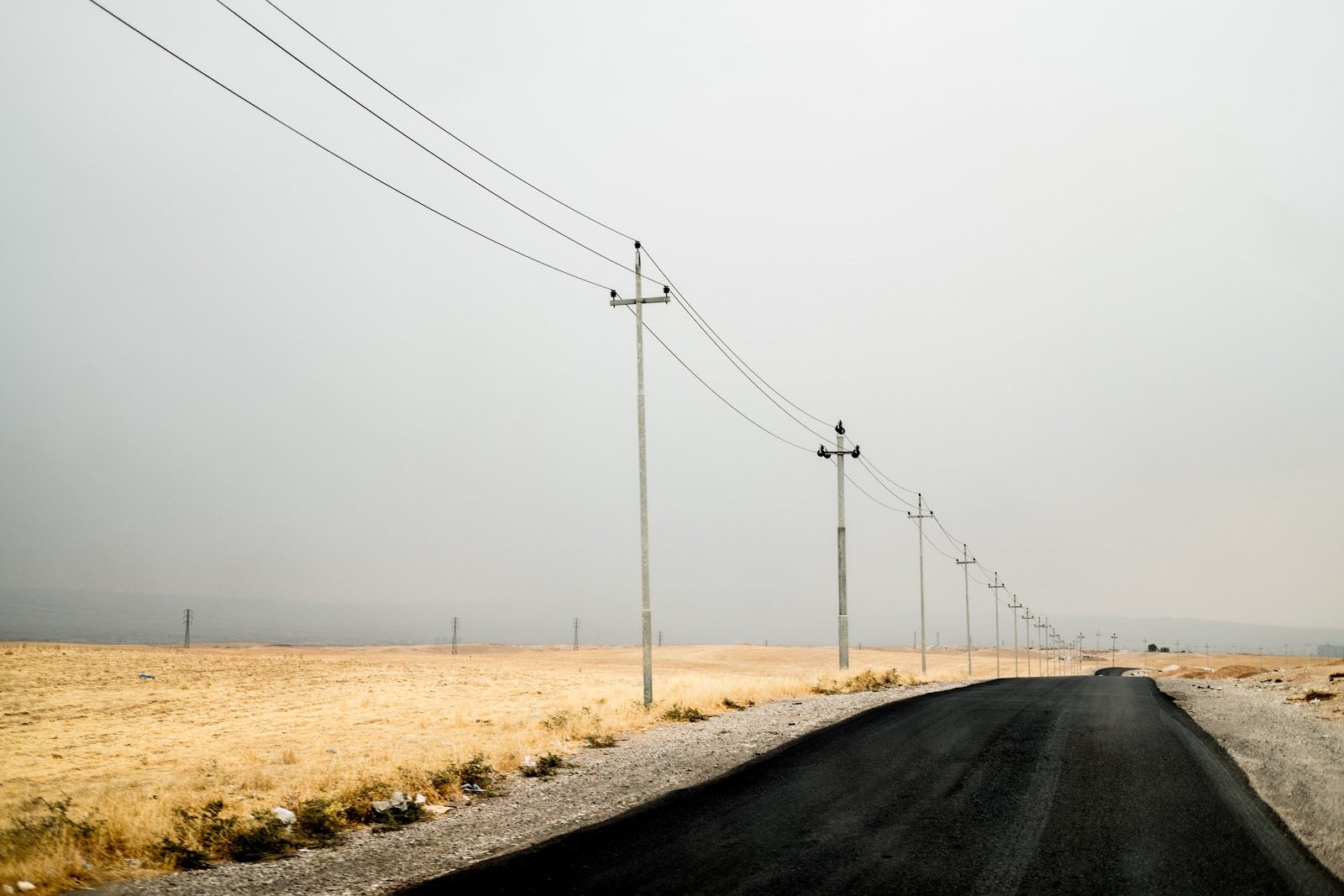 Gold and grey: the road out of Erbil. Kurdistan, Iraq, October 2018 © Charlene Winfred

Iraq was never on my radar as a travel destination. All I knew about it was what I read on the news, which was inevitably bad: bombs and bullets, violence, tragedy, destruction. I was afraid. Even after willingly buying my ticket, getting on the plane, and arriving in Iraq for a month’s work with Preemptive Love. But there I was weeks later, driving down a length of beautiful blacktop, in a Korean sports utility with my Canadian friend at the wheel, thinking “man, this looks like New Mexico.” Or bits of West Texas I’d been through. More than anything, it was that brand of light, cutting around the mountains in the dry, dry air.
‍
My reality of course, was not everyone’s reality. Not all the roads in Iraq are as beautiful as the miles I’d travelled in those few weeks. The trauma of war is still fresh for many, with 2 out of almost 6 million displaced Iraqis still having no home to return to, because everything they would have had to return to, was razed by the recent war with ISIS, to say nothing of millions of others affected by the decades of war this country has been through. All of those news stories? I would hear some of those stories in the 4 weeks I was there, and some I wouldn’t understand because no matter how much I’d read, I’d never lived through anything similar. And I could, and would, leave.

But this post isn’t about those stories. Those stories live where I work. 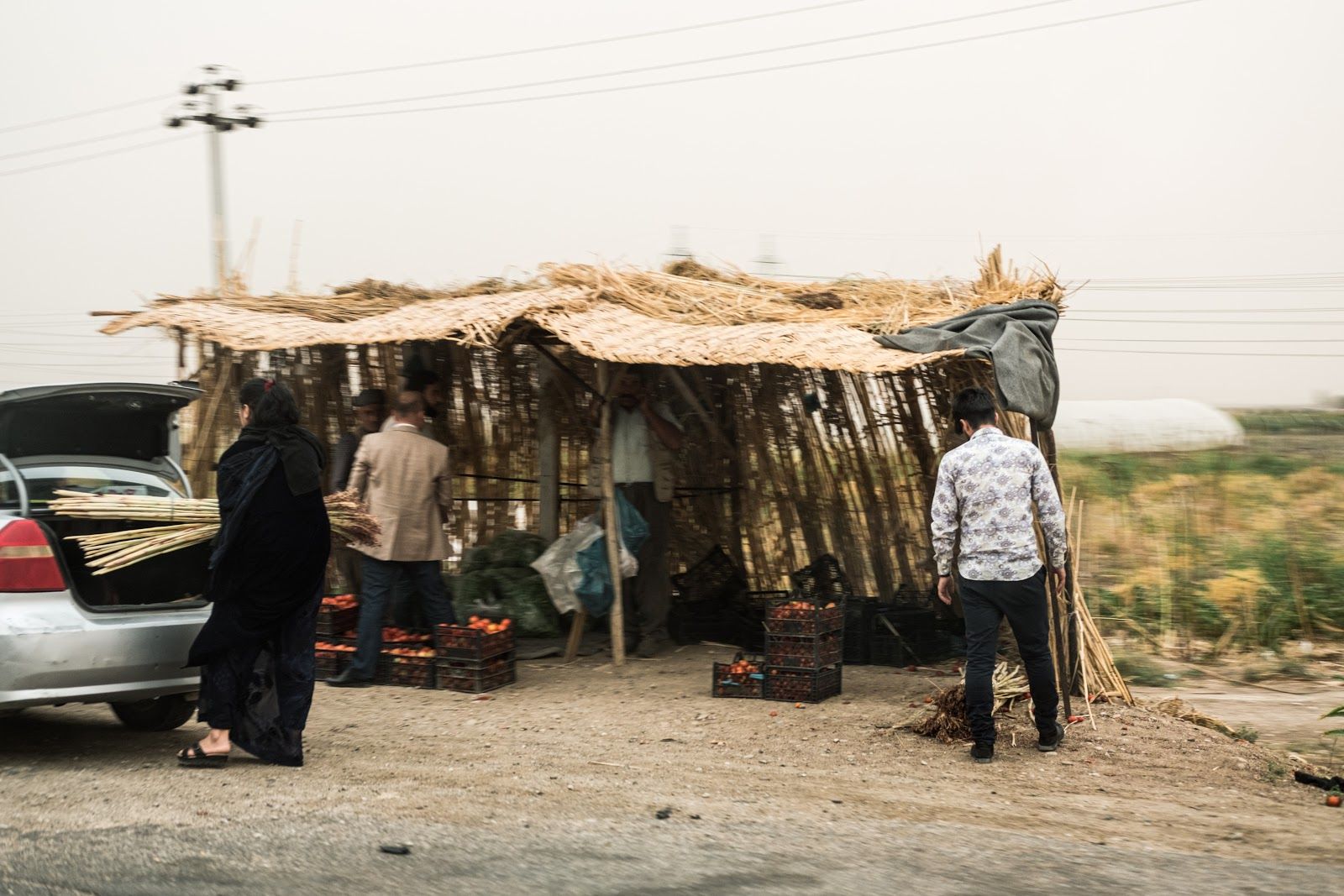 This is about another story. About how this first world brat stepped into Iraq and found herself confronted with bits of places she’d lived in and loved… and home.

Back on the road from Erbil to Dohuk, which was our furthest destination, there were both ramshackle and fancy neon lit stalls at rest stops, where vendors sold sweets and snacks and toys and just about everything else. There was that particular random stacking of vehicles that is parking where people come and go in short order. 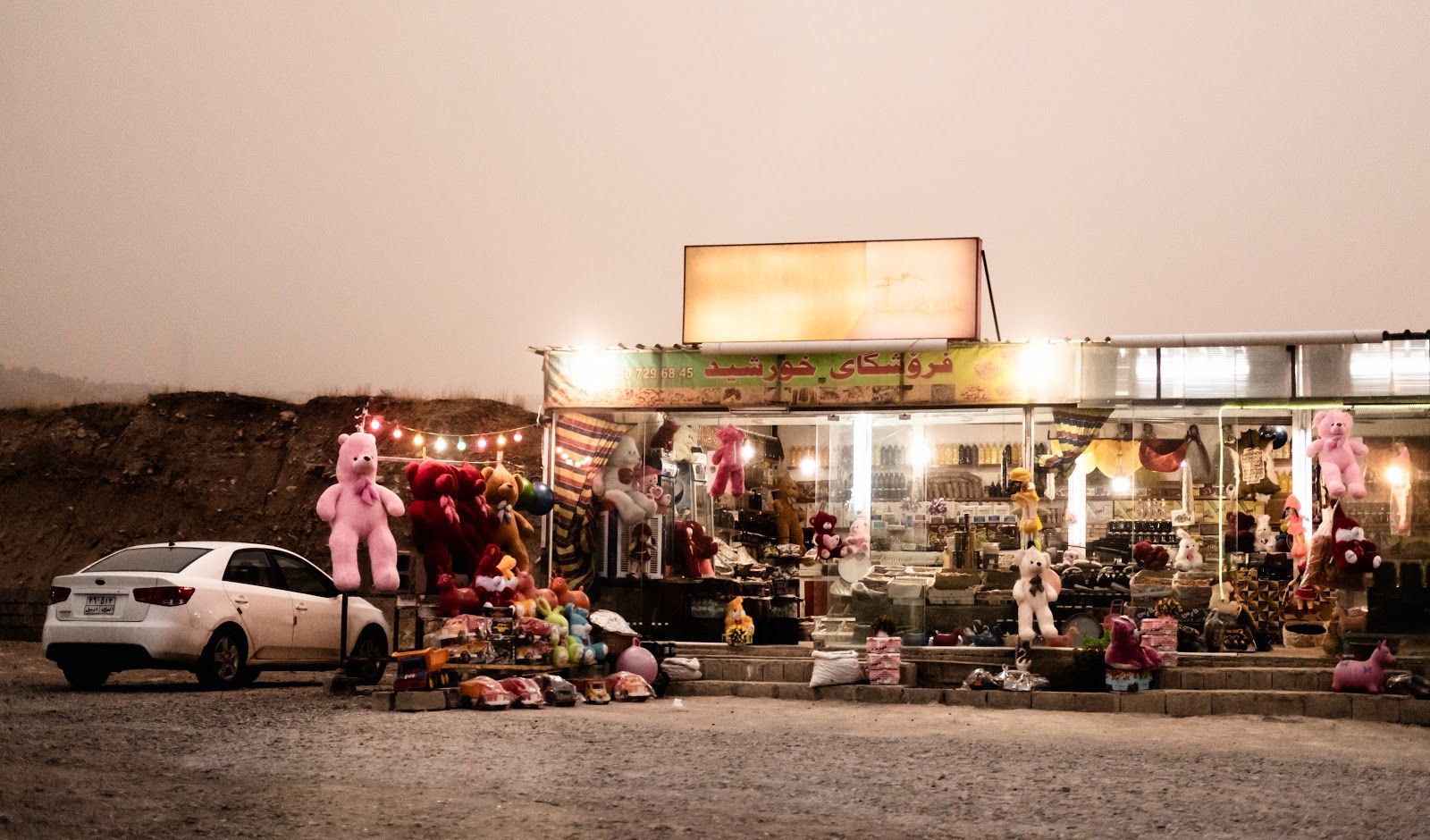 Those reminded me of a different part of the world. The Malaysia of my youth, before the North-South highway bisecting the peninsula was completed, and we made our way to Malacca and Kuala Lumpur along the windy old trunk roads, just another in a long line of cars trailing some timber lorry snail-pacing it under the weight of stacked logs.
‍
It was incredibly reminiscent of the towns I remember from the 80s, when my parents and I would balek kampong* to visit family in Malacca. First we’d go by bus (big up the Singapore-Malacca Express!) then later on, car. That journey inevitably wound through aforementioned trunk roads, and you’d stop at roadside vendors for makan and kopi**, and buy tidbits for the rellies. The lean-tos, food stalls, and bustle…this is what the rest stops on the roads in Kurdistan felt a lot like.
‍
It wasn’t just the passing places though. It was also the city where I stayed for those 4 weeks.

*literally: to “go back to the village,” your home, your roots.
**food and coffee
‍ 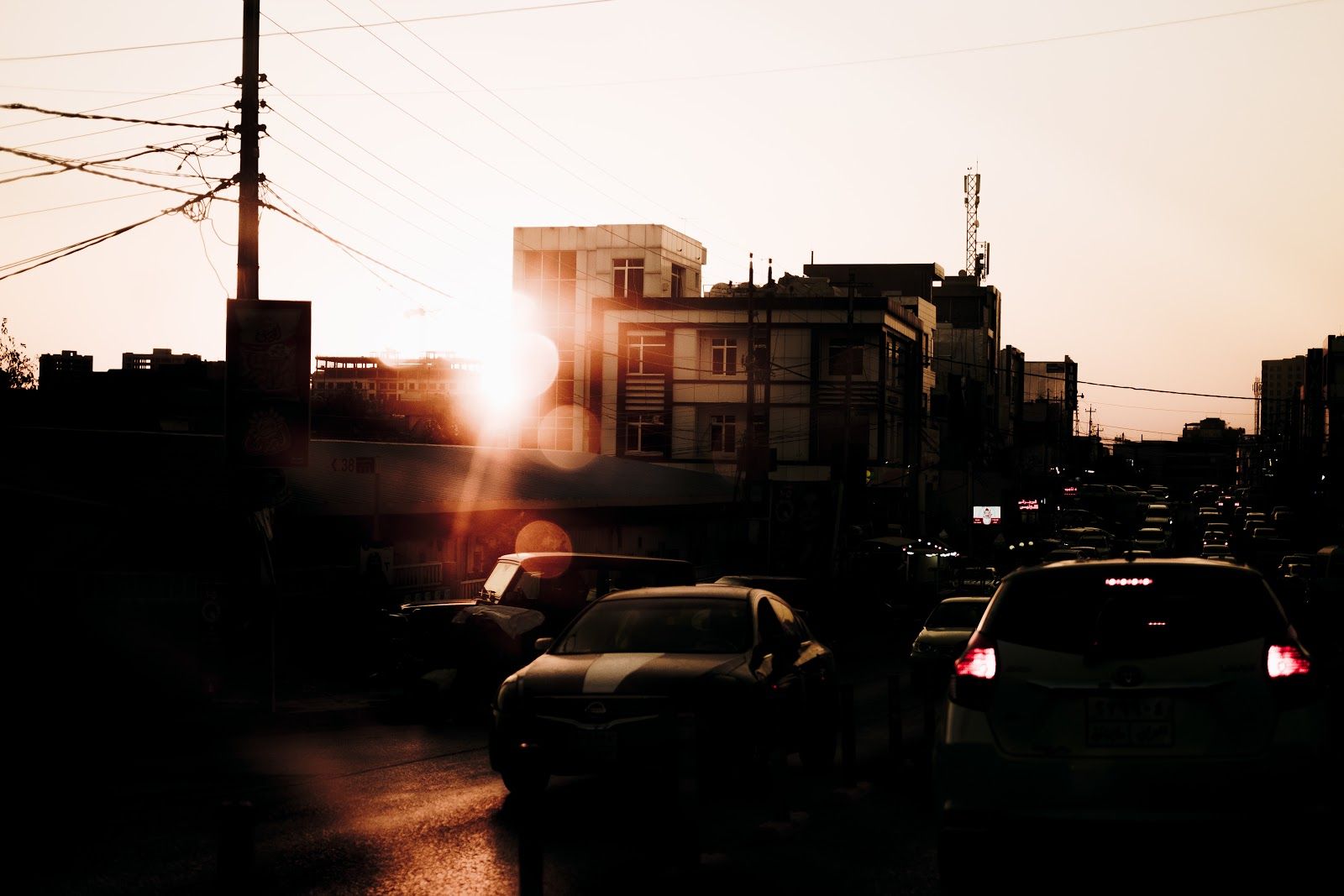 I don’t know what I was expecting when I landed in Sulaymaniyah where I would be based for the month I was there, but I wasn’t expecting to walk around in a state of constant déjà vu.

The light at that altitude is the same light I learned to photograph in: except that was in Perth, Western Australia, being about as far south of the equator as Suli is north. Dusty rows of eucalyptus line various parts of the city. When I first got there, I’d deal with my discombobulation by standing under a stand of these before I entered the apartment compound I lived in. I’d try desperately to detect some of the scent that I’d loved so in the fourteen years I lived in Perth, usually to no avail. Maybe the trees were too caked in dust. Or my nostrils were. Or some combination of both.
‍
But a little piece of the land down under was still lovely. 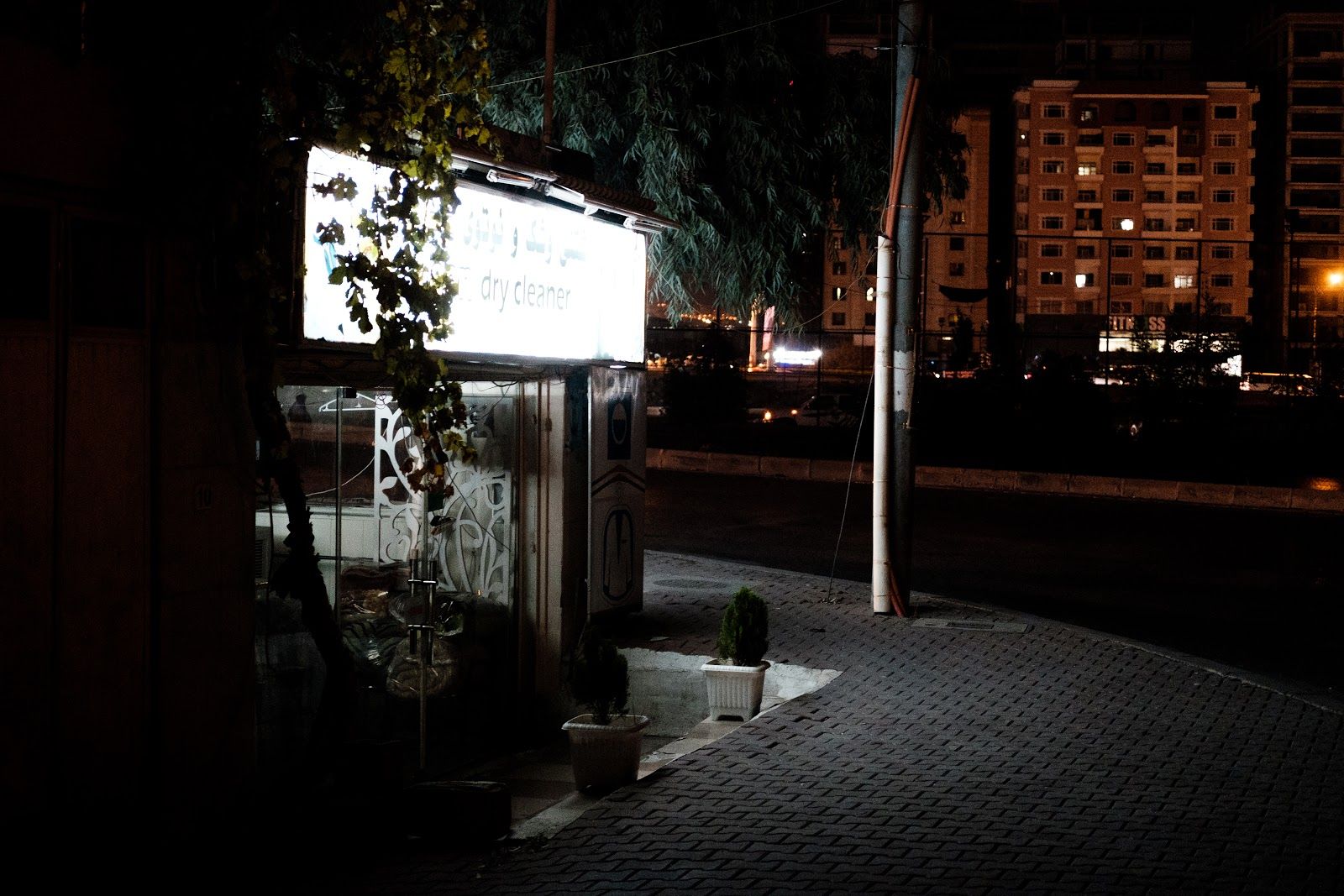 Not that you can see it, but the eucalyptus tree just behind the lit sign of the dry cleaners had just begun shedding its bark when I was there. Iraqi Kurdistan, Sep 2018 © Charlene Winfred

It wasn’t the only thing. Many of my friends and family back home were excited by all the pictures I’d shared from Sulaymaniyah itself. Not because they were exotic, but precisely the opposite. Everyone from my part of the world offered an equivalence from our home region: Cambodia / Vietnam / Laos / Thailand. The particular entrepreneurial chaos of a society making do, although in different circumstances. I was born at the tail end of Singapore’s modernisation, but a couple of other friends shared my sentiment, “eh, it’s like Malaysia last time!” ***

***the olden days of one’s youth 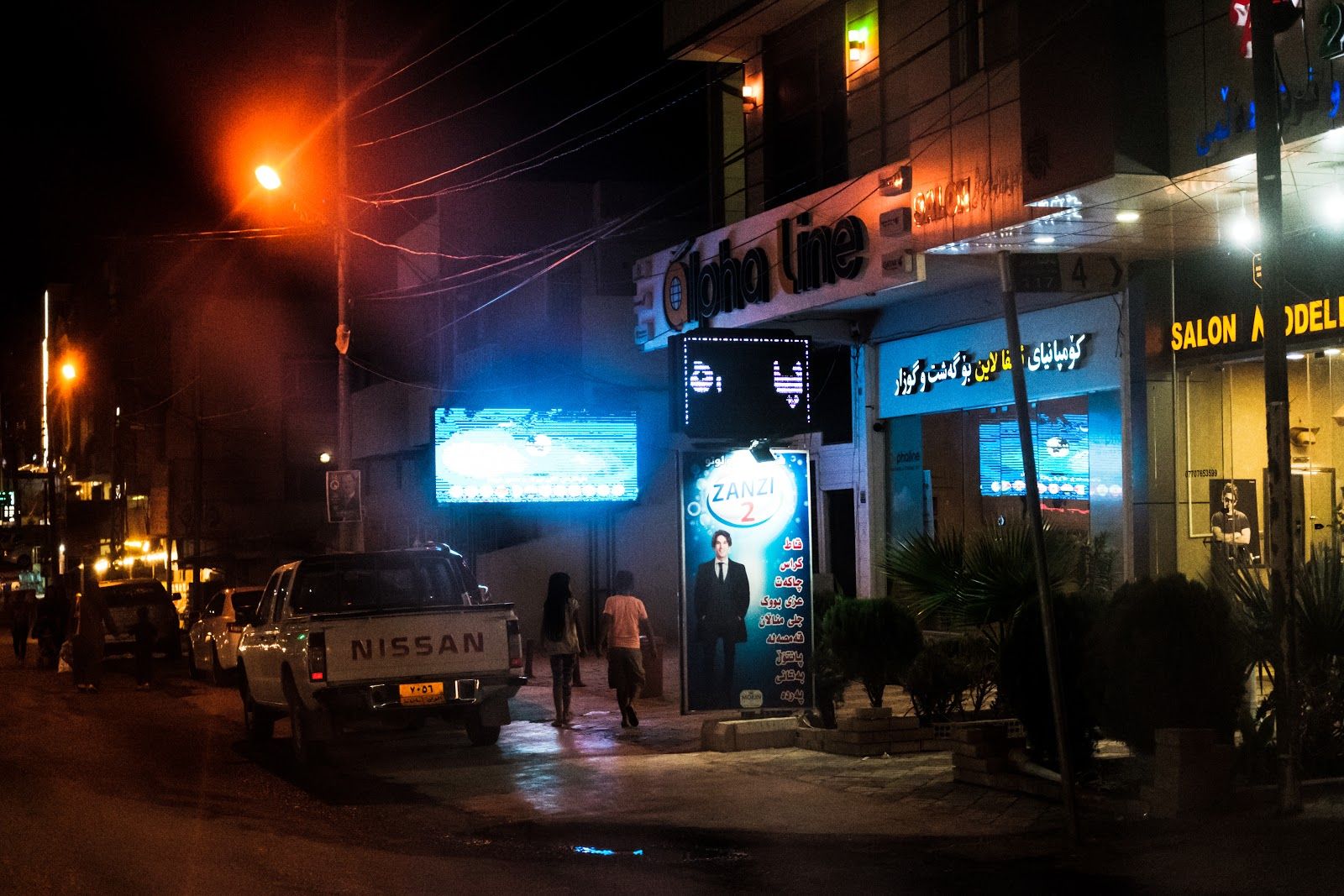 Not that you can see it, but the eucalyptus tree just behind the lit sign of the dry cleaners had just begun shedding its bark when I was there. Iraqi Kurdistan, Sep 2018 © Charlene Winfred

What grabbed me, was not only the general shape and feel of the city, but the echo in the details. The particular variety of fruit and how it’s arranged at the fruit sellers’. The parking logic on road sides. How you’d direct a taxi driver – by landmark and area, not address – is exactly how you’d tell an old school taxi uncle where to go, where I live. “Lavender, ICA there” utilizes the same logic as “Bakhtiari Kon, near Istanbul Salon.” If a landmark was unique or well known enough, just “Singapore Casket Company” or “Family Mall.” Not speaking any Kurdish or Arabic, I can’t chat with the taxi guys, but it doesn’t stop them trying to chat with me! 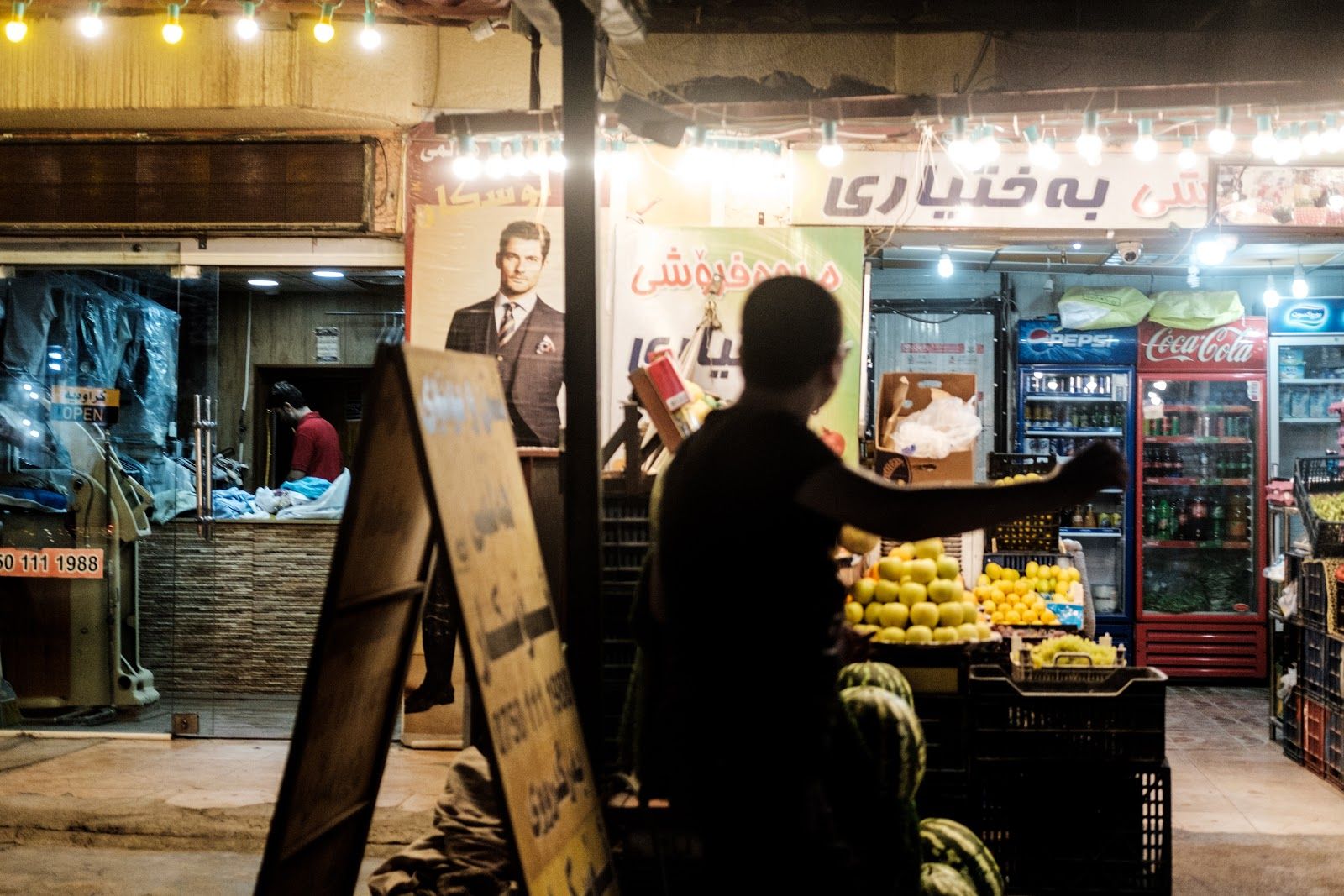 And other little similarities jolted. Not showing the soles of your feet to elders / guests / anyone you respect. Bare feet inside the home. Attaching an honorific as a gesture of respect and/or affection. Sitting/Lying/Sleeping on the floor, especially in the heat of day. I’m not yet familiar with the specifics of some of these codes of conduct, but they make sense to me. I was raised, and in large extent still live with sensibilities that are very similar.

I didn’t quite know what to think of all of this. Until I found myself saying to someone “well, I’m Asian too.”‘

I’ve never heard anyone in this region identifying as Asian, despite being geographically in Asia. For most here, “Asian” means those of us from the east of the continent. But perhaps the great trading routes of old, European/Western colonisation, and American media connect the east and west of the continent in more ways than a lot of us realise. 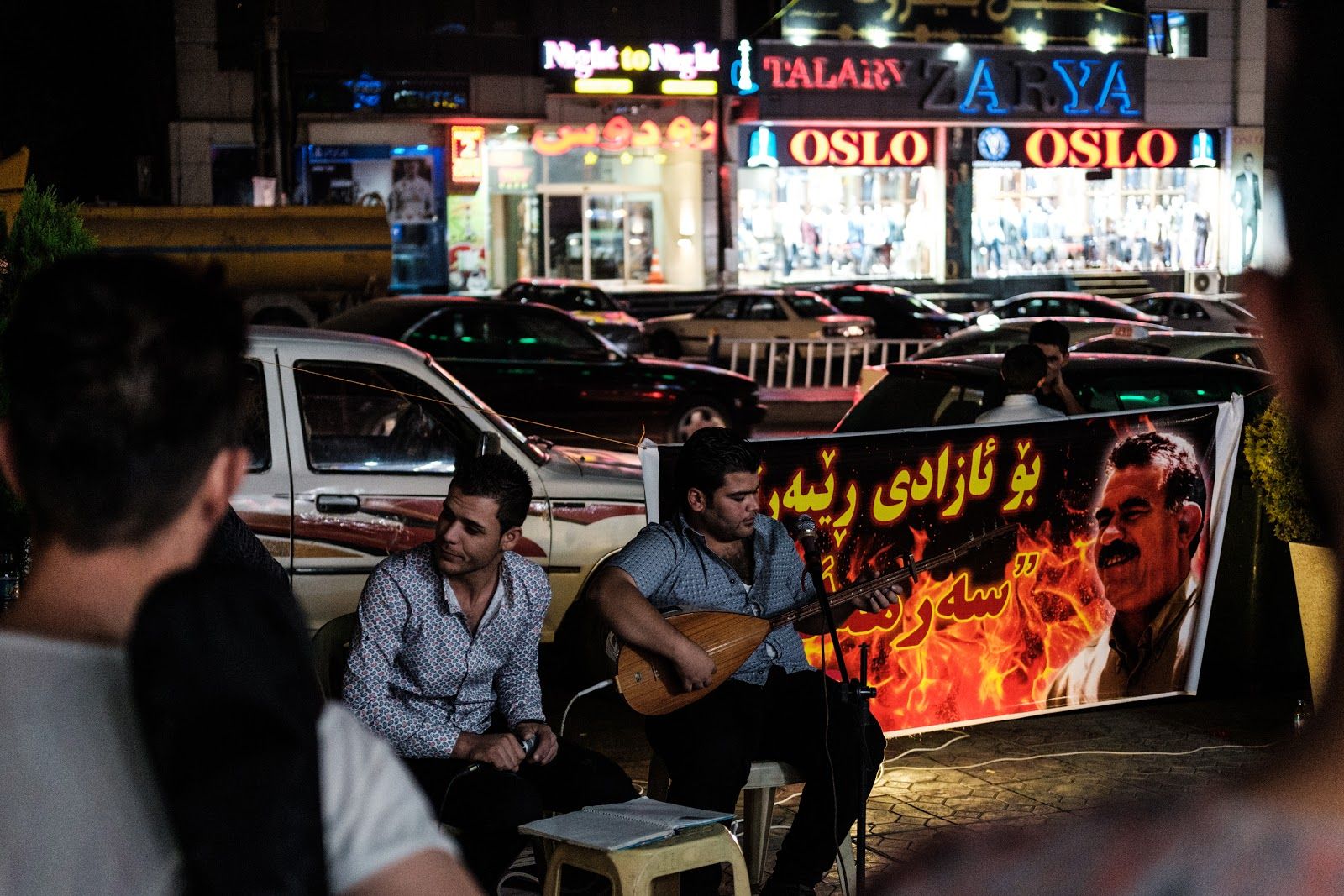 Iraq and Singapore are separated by a swathe of continent, generation, history and situation which are as different as can be. But fellas here are as particular about sculpting their hair into impressive constructions as the fellas there. Any older man is an uncle (although an older woman in Iraq is not necessarily an aunty). The fullness of a woman’s hair, an equal obsession (don’t even start with the horror that greets unusual hair fall), as is the fairness of her skin.

We are more alike than we know. 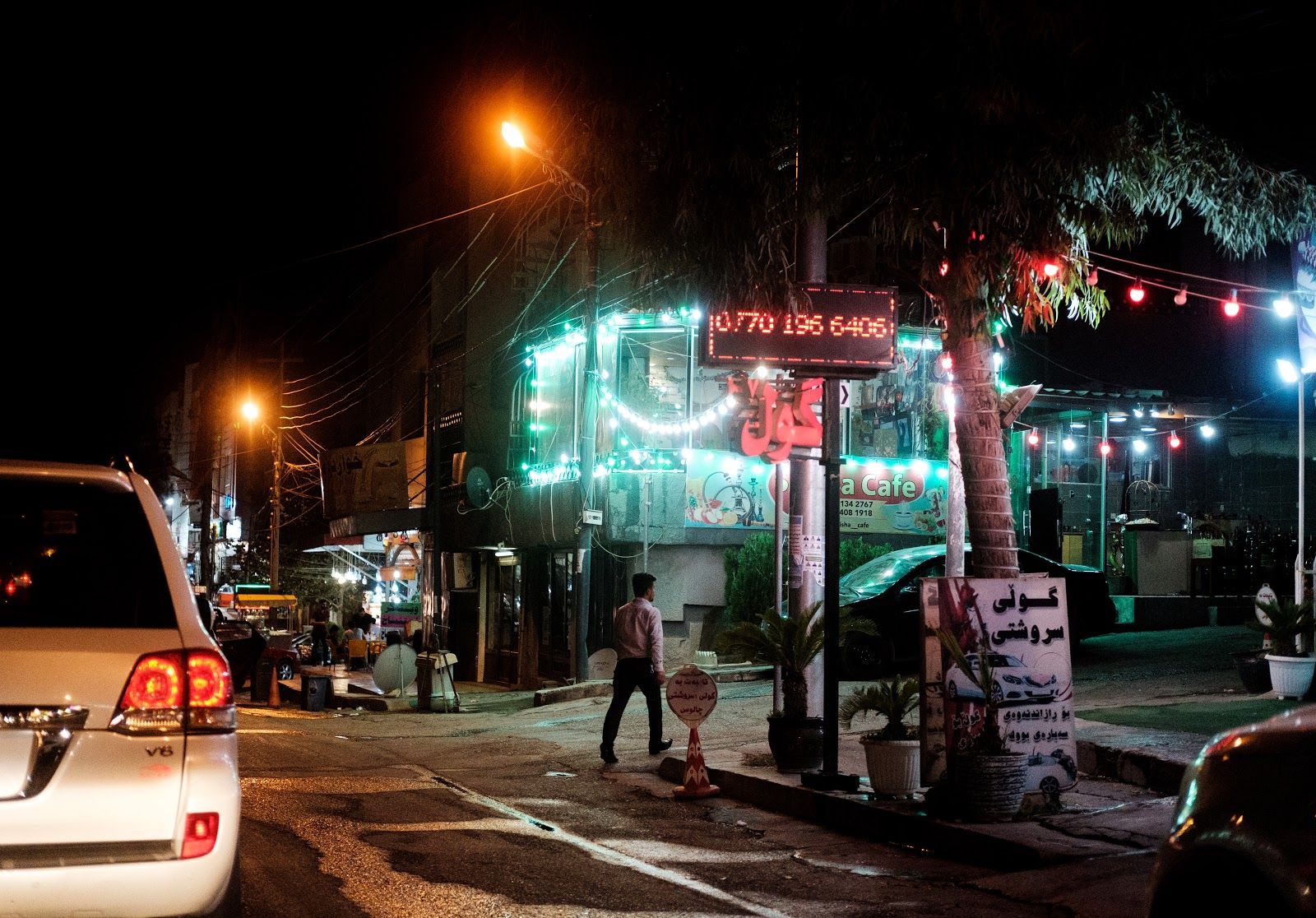 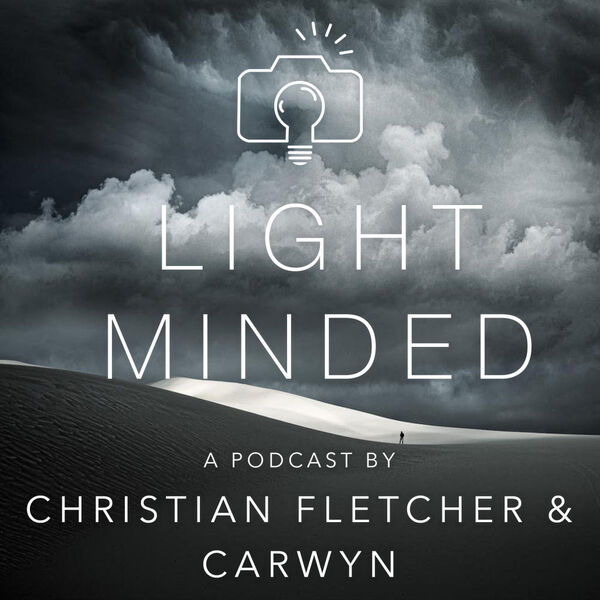 Listen to Charlene on the lightminded podcast

Charlene Winfred is a rising star, and photography is only one of the creative outlets she excels at. She is also an accomplished writer and managed to blend these two skills in a hyper-personal way that speaks to anyone who sees her work. Better yet, she is using these skills to make the world a better place. Currently in Iraq, she consistently produces stories like this, stories that bring the foreign and unknown down to the level of personal and relatable.

Charlene Winfred is a photographer and a nomad. Straddling ethnicities, nations and cultures without ever fully inhabiting a side, she is a permanent in-betweener. Like generations of her family, she left her place of birth to live elsewhere: from Singapore to Australia, to a 6 year stint on the road. In 2019, she moved to northern Iraq (Kurdistan) for work. In recent years, regular returns to Singapore have offered a new lens to explore a life of perpetual transit: the challenge of finding home, and the meaning of belonging.