Possible cost of complacency and
Last of meeting places

In 2016, my colleague Todd McMillan and I were tinkering in a communal research studio. Todd was pairing text excerpts from speculative fiction novels with photographs he’d taken on a research trip to Antarctica, while I was creating collages inspired by descriptions of landscapes in Australian novels. We discussed the books we were reading and the value of fiction as a tool to think through environmental issues.
‍
In Antarctica, a scientist pointed up and said to Todd: ‘that’s the hole in the ozone layer.’ An actual hole. This anecdote floored me. Obviously, I knew about the hole but it was always an abstract idea; it never occurred to me that it was a thing that could be pointed at. Todd’s story was the first time the ozone hole had been presented to me within a narrative, rather than as scientific fact. Suddenly, I could relate this overwhelming ecological problem to myself and I felt a pang of dread.
‍
Todd and I talked about widespread climate apathy and the possibility that where science communication is failing to engage the public in these matters, science fiction may have more success. Rather than reading science communicators’ accounts of climate uncertainty, perhaps we should read novelists. I abandoned my collage project and read the speculative  novels Todd was referencing in his work—Nevil Shute’s On The Beach and George Turner’s The Sea and Summer—to see where they would lead me.
‍
At the time, I was also reading Johanna Drucker’s Graphesis: Visual forms of knowledge production, in which she aims to establish a critical frame for understanding visualisation as a primary mode of knowledge production, in an era when “graphics of all kinds have become the predominant mode of constructing and presenting information and experience.”
‍
Information visualisations such as charts, maps and diagrams can be powerful rhetorical tools; an entire argument contained within a single image. Currently, anyone with basic computer literacy can produce convincing looking charts, diagrams and maps. As a result, information visualisations are ubiquitous in the digital landscape, neatly summarising data sets and lending the appearance of authority to news reports, websites and social media posts.
‍
However, scholars such as Drucker warn that software programs allow people to make and share information visualisations “without clear understanding of their rhetorical force or the suitability of their underlying semantic structuring principles to the problem for which they supposedly present a solution or transparent analysis.” In other words, we are quickly able to generate visualisations which have appearance of meaning, without understanding how that meaning is produced. Even the IBM sponsored free visualisation generator ‘Many Eyes’ comes with a disclaimer: "But there’s more to visually communicating data than simply using a free tool on the web – no matter how cool or useful that tool can be. Good tools are only as good as their operators. The unfortunate truth is if you’re not a data-savvy individual, even the best tools are limited in how they can help.” Visitors are then pointed to a section of the Many Eyes site which creates a ‘custom data dashboard’ – at a hefty price.

To demonstrate how visualisations function as arguments, Drucker calls for design and humanities scholars to experiment with qualitative approaches to information visualisation, approaches which aim to reveal the nuance, ambiguity and subjectivity inherent in qualitative fields of inquiry.
‍
In response to Drucker’s call, I considered: How might I design diagrams which attempt to render visible the ‘authorship’ of the designer, in order to think-through and demonstrate the constructed nature of these visual forms? I decided to use passages from the two novels Todd introduced me to, alongside data about the subject of these novels – climate change and nuclear testing. 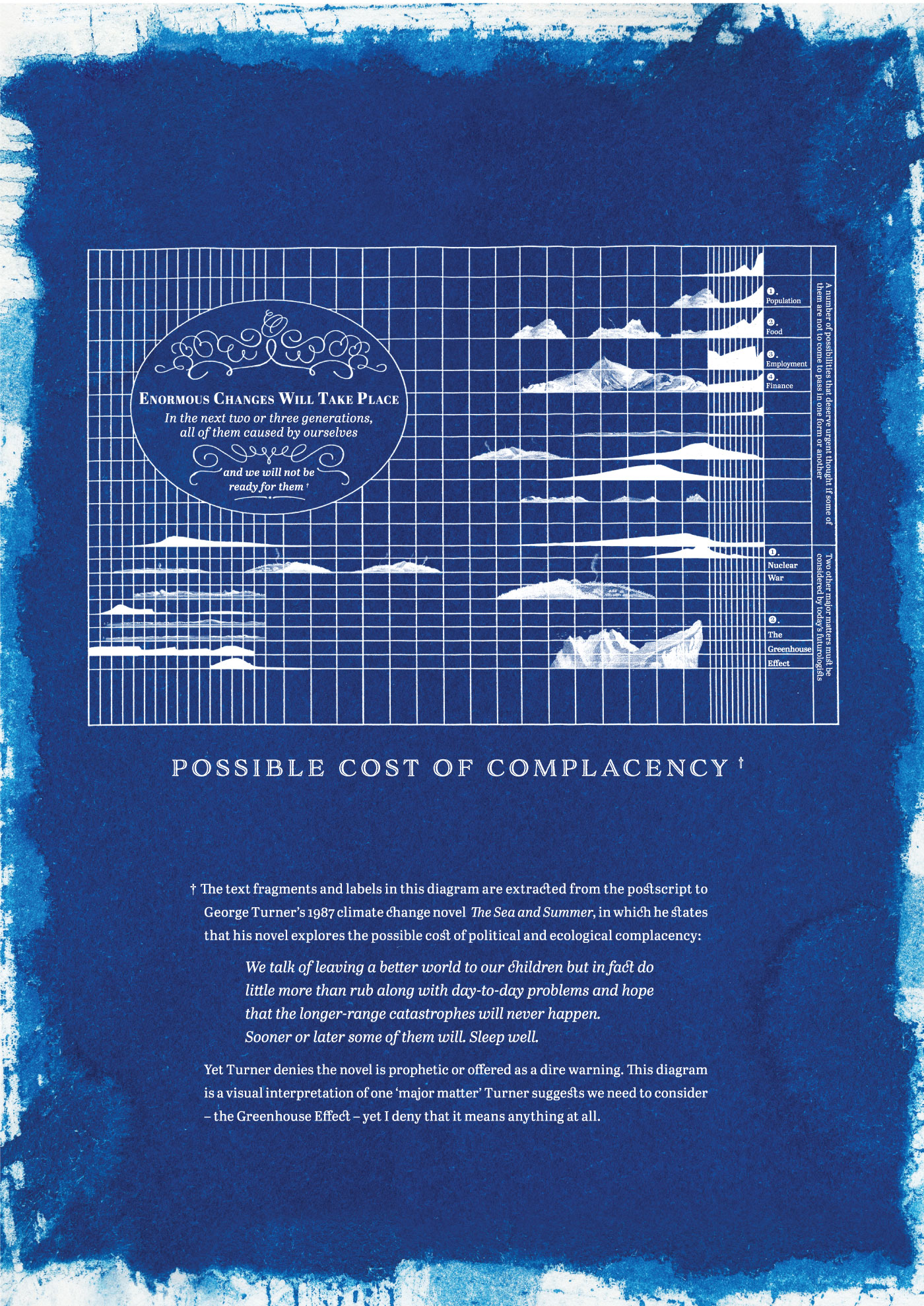 This diagram presents excerpts from George Turner’s 1987 Sea and the Summer, a pioneering ‘cli-fi’ (climate fiction) novel, in the form of a chart. The graphical forms on the chart resemble icebergs (common illustrations accompanying articles about climate change), but they do not relate to the text excerpts or represent actual data. At a glance the diagram looks like it might be a visualisation about global warming/Arctic melting,  but on closer inspection it reveals a confusing narrative.
‍
Most diagrams and charts about climate change in news and social media are equally abstract to me; they fill me with a sense of dread – those lines accelerating in to angry red zones in the near future indicate something is very wrong – without giving me any sense of why this is happening or what might be done about it. Until now, I have not stopped to consider that the diagrams may not be accurate, or may in fact be deliberately misleading. The written text in my diagram informs viewers that this is a deliberately ambiguous image, and draws attention to my ‘authorship’:
‍
The text fragments and labels in this diagram are extracted from the postscript to George Turner’s 1987 climate change novel The Sea and Summer, in which he states that his novel explores the possible cost of political and ecological complacency: "We talk of leaving a better world to our children but in fact do little more than rub along with day-to-day problems and hope that the longer-range catastrophes will never happen. Sooner or later some of them will. Sleep well."Yet Turner denies the novel is prophetic or offered as a dire warning. This diagram is a visual interpretation of one ‘major matter’ Turner suggests we need to consider – the Greenhouse Effect – yet I deny that it means anything at all. 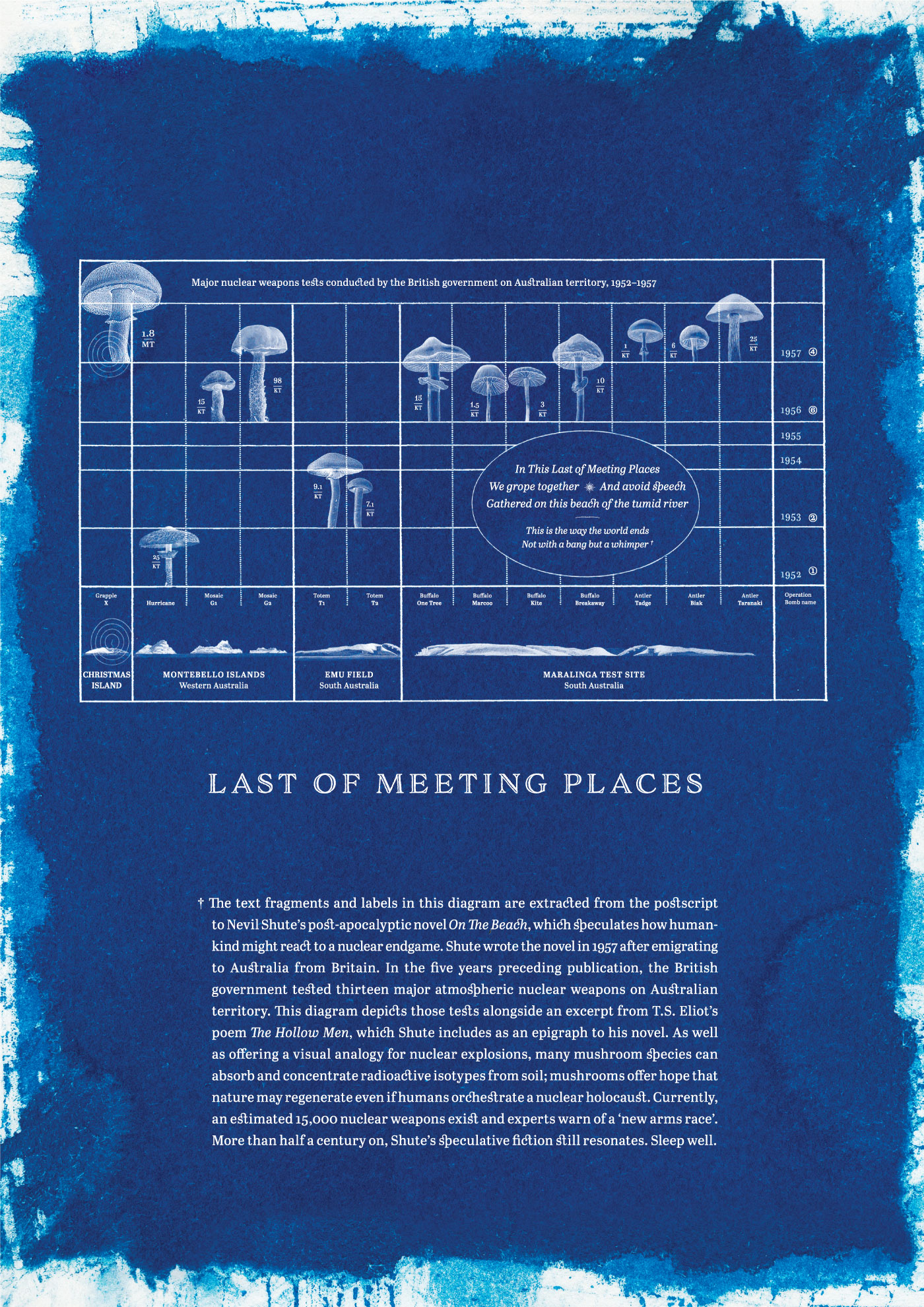 Diagram 2: Last of Meeting Places
‍
This diagram blends content from Nevil Shute’s post-apocalyptic novel On The Beach (1957) with data about nuclear weapons testing conducted on Australian territory by the British government in the five years preceding the novel’s publication. Shute emigrated to Australia from the UK around the time he wrote the book. Presenting factual data about nuclear tests from the era in which this classic novel was written gives contemporary readers context by which to consider both the novel, and an ugly nuclear history that has been widely forgotten. I began reading more closely about the tests, particularly Elizabeth Tynan’s Atomic Thunder: The Maralinga Story. Quotations from observers of these tests haunted my sleep:
‍
England has the bomb and the know-how; we have the open spaces, much technical skill and a great willingness to help the Motherland. Between us we shall help to build the defences of the free world and make historic advances in harnessing the forces of nature. Howard Beale, Australian Minister of Supply, 1955
‍
At the end of the countdown, there was a blinding electric blue light, of such an intensity I had not seen before or ever since. I pressed my hands hard to my eyes, then, realised my hands were covering my eyes. This terrific light power, or rays, were actually passing through the tarpaulin, through the towel, and through my head and body, for what seemed ten to twelve seconds, it may have been longer. After that, the pressure wave, which gave a feeling such as when one is deep underwater. This was then followed by a sort of vacuum suction wave, to give a feeling of one’s whole body billowing out like a balloon.Observer, Mosaic G1 at Monte Bello, 16 May 1956.
‍
Mushrooms are a visual analogy for nuclear explosion, but also represent hope; some mushrooms can absorb radioactive isotopes from soil – even if humankind orchestrates a nuclear holocaust, the planet can regenerate without us.

We love great design. We love data. We love paying homage to the pioneers who came before us and we love when the goal is greater than the sum of the parts. Zoe’s presentation of critical issues via design and blueprint like schematics draws the viewer in with beauty, only to reveal the consequences of inaction will be far from beautiful.

Zoë Sadokierski is an award-winning book designer, writer and senior lecturer at the UTS School of Design, where she runs a studio investigating the evolution of books in the digital age and narrative approaches to ecological communication. She is former president and a founding member of the Australian Book Designers Association. In 2015 Zoë established Page Screen Books, an independent publisher of artist’s books and visual essays.